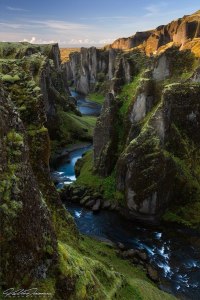 I have been known to stop myself before I begin with a major undertaking. Especially if it’s a dream. In fact, the bigger the dream, the more likely I have been to not take the first step, because sometimes my idea of what the dream could be… or what I could be if I managed to accomplish it, seems so grand and so daunting that feels bigger than I. And accomplishing it seems so distant.

But the natural world makes no such drama of its path. The natural world simply moves forward at its own pace, in its own rhythm, in its own way. Worry, time, effort, what-ifs or fear of failure do not exist in Nature. It doesn’t require any courage. Nature is effortless in its creation and manifestation.

Thank goodness Nature does not judge itself the way we do. If this little river had thought about how long it would take to create this canyon, or worried about whether any trees would grow or if fish or birds would deem it worthy enough to swim in its waters or drink at its banks, maybe it would have just dried up and never meandered forward. If anyone had told this river that it would take hundreds of thousands, maybe even millions of years, but one day, it would create and flow through one of the most magnificent canyons in Iceland, would it have been motivated or scared away?

Move in the direction of your dreams. The time is going to pass anyway. Don’t worry about how long it will take.
Be like the river.
One day, you’ll look up and you will have created something beautiful.

“The best time to plant a tree is 20 years ago. The second best time is now.”
~ Chinese proverb

Tell us what you think! Cancel reply